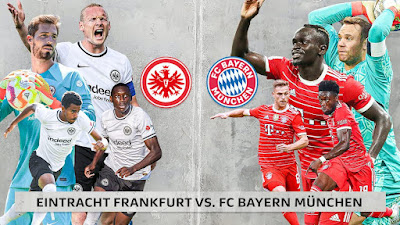 The Bavarians will be aiming for a 11th consecutive Bundesliga title this term. The gap between them and rest of the league was evident after they finished the 2021/22 season 8 points clear of Borussia Dortmund.

But, Nagelsmann has to do this without the services of their talismanic striker Robert Lewandowski. The 33-year old switched allegiance to Barcelona after netting 30 plus goals in three consecutive seasons.

Sadio Mane has arrived from Liverpool to replace the Pole. And he made a solid start to his career in Germany by netting in the 5-3 Super Cup win against Leipzig.

Eintracht Frankfurt finished 8th in the league, all due to the poor form at the end of the season where they ended up without a win in eight games.

Yet they claimed the tickets to Champions League group stage by winning the Europa League. They bagged some excellent results in the competition. But nothing beats the 4-3 aggregate win against Barcelona.

Oliver Glasner’s men appeared for the first competitive outing of the season at Magdeburg on Monday and bagged a deserved 4-0 win.

Bayern won 1-0 in the corresponding fixture of last season, but Frankfurt were victorious in the previous two.

The Bavarians scored at least one goal in 7 consecutive visits to this stadium.

The most scoreline in recent meetings between the sides is 2-1 that occurred in 3 of the 5 meetings.

Without a doubt, Bayern Munich are heavy favourites for this clash, but there is no value in backing them for an outright win. Therefore we will back the visitors in combination with btts priced at 2.40 odd.

There are some solid anytime goal scorer options with Bayern, but odds are too short to offer us any value. We back Rafael Santos Borre instead, the Argentine failed to find the target at Magdeburg, but he is a big ariel threat and has the capability to convert half chances.