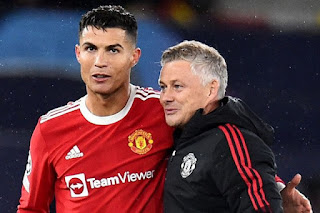 Man United are preparing to take on Everton in the early kick-off in Matchweek 7 in the Premier League. Given the club's past few results and dip in form, this Old Trafford showdown with the Toffees is expected to be both tough and crucial for Ole Gunnar Solskjaer's men.

While the Red Devils head into this clash on the back of their thrilling 2-1 victory over Villarreal in the UEFA Champions League, that midweek tie was the third game in a row in which the English giants struggled to perform, with an excellent goal from Cristiano Ronaldo at the death sparring the home side the blushes.

Two defeats from their last three games and three losses from their last five outings in Man United's form heading into their encounter with Rafael Benitez's side. And given that Ronaldo and Co. lost their most recent English top-flight outing, going 1-0 down against Aston Villa at the Theatre of Dreams, it is crucial that Solskjaer's men respond on Saturday with a win.

With that in mind, one can understand why Man United fans were left flabbergasted by Ole's team selection once the starting eleven was announced for the Everton clash. Despite scoring the winning goal against Villarreal, taking his tally to five in five and saving the club from another Champions League crisis, Cristiano was named on the bench for the showdown with the Toffees.

And that's not all! Paul Pogba, who has been one of the club's star performers so far this season, was also dropped, joining the five-time Ballon d'Or winner and summer signing Jadon Sancho on the bench. Speaking ahead of kick-off, Ole was asked about the five changes from the midweek lineup that beat Villarreal, with the Norwegian boss explaining that he merely wanted to freshen up the squad after a grueling 90 minutes against Unai Emery's men. However, this did not stop eyebrows from being raised given how well CR7 has started his second spell in Manchester.