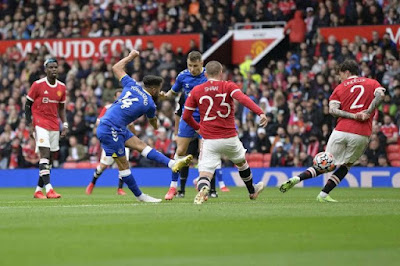 Manchester United will welcome Everton to Old Trafford in Saturday's early kick-off game ahead of the international break. The Red Devils are eager to return to winning ways in the league after the surprise defeat to Aston Villa last weekend. A lone goal by Kourtney Hause denied Ole Gunnar Solskjaer's side the opportunity to extend their unbeaten run in the competition to six in the new campaign.

The biggest talking point was perhaps about Bruno Fernandes missing the 93rd-minute spot-kick that would have tied the game for the Old Trafford outfit. Needless t say, the Manchester club has seemingly put the episode behind them as they managed to respond with a win over Villarreal in the mid-week's Champions League outing.

A late goal by Cristiano Ronaldo sealed the win for United who had had Alex Telles scoring a sensational equalizer with a volley after his side had conceded Paco Alcacer's opener in the early minutes of the second half. They are expected to take the same confidence to test the resolve of an Everton side that has impressed so far.

The Toffees have so far registered four wins and a draw from the six league games they have featured in this season. In that, they have put together some impressive performances that saw them clinch wins against Southampton as well as Leeds, Brighton and Norwich. Against Manchester United, they will fancy their chances as they have managed as many as three draws and a win in the last five meetings between the pair.

Under the tutelege of new boss Rafa Benitez, the Merseysiders have scored 12 goals in the six games played so far and have conceded seven goals in the process. In other to potentially run away with the win, they will be required to keep the massive attacking talemts in the United side at bay at Old Trafford.