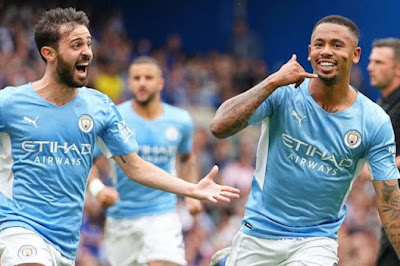 Sunday will witness one of the most crucial Premier League fixtures take place, with Liverpool and Man City set to lock horns in a highly-anticipated Anfield showdown. This 11:30 a.m. ET clash will see two of the biggest favorites for the English top-flight crown battle it out in a game that could go a long way in the title race.

These two teams entered this round sitting in first and second respectively, with the Merseyside giants boasting a one-point advantage over their rivals. While this is the slightest of gap, a home win for Jurgen Klopp's men would see them pull four points ahead of the defending champions, and that would be a considerable gap over the Cityzens.

While Salah and Co. did suffer a slip-up last weekend in the Premier League, it should be stressed that Liverpool's form has been nothing short of exceptional. The Reds enter this clash on the back of a convincing 5-1 thrashing of Porto in their midweek UEFA Champions League outing, with Jurgen's front three working themselves into form ahead of their crucial weekend matchup.

Mohamed Salah and Roberto Firmino both came out of that trip to Portugal with a brace, with Sadio Mane also getting his name on the scoresheet. In the Premier League, the Reds have picked up four wins from their first six games, scoring an impressive 15 goals, making them the best attack in the English top-flight so far, while also boasting the third-best defense in the league.

However, it's hard not to feel like last weekend's trip to Brentford was an opportunity missed for the 2019/20 champions. The newly-promoted side went toe-to-toe with Klopp's heavyweights, drawing 3-3 with the Merseyside giants in one of the most thrilling games of the 2021/22 campaign.

As for Man City, things have been quite the opposite. The Cityzens suffered a disappointing midweek defeat in the UEFA Champions League but secured an amazing victory away to Chelsea in their last Premier League outing. That European loss came at the hands of PSG, with Guardiola's men going 2-0 down against the Ligue 1 giants thanks to two stunning goals from Idrissa Gana Gueye and Lionel Messi.

Despite that result, Grealish and Co. came out of that game boasting a lovely performance, with the English side doing everything bar putting the ball into the back of the net. It halted the momentum built up after the 1-0 win at Stamford Bridge, but Man City should not lose too much confidence ahead of this tie.

Liverpool: Klopp will be without superstar right-back Trent Alexander-Arnold, with the Englishman joining Thiago and long-term absentee Harvey Elliott on the sidelines. James Milner will thus remain in the lineup, with Curtis Jones also eyeing a start after back-to-back impressive displays from the Liverpool youngster.

Man City: Ilkay Gundogan will, unfortunately, be unavailable, with the German midfielder not expected to make his return until after the international break. Zinchenko is also a doubt. Phil Foden and Gabriel Jesus, who were both benched for the PSG defeat, are likely to return in place of Sterling and Mahrez.