Liverpool vs Man City, Man United vs Everton and all MD7 games in the Premier League this weekend 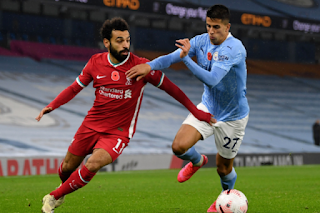 With the international break lurking in the shadows once again, Premier League clubs will be poised to enter the period with favorable results when they feature in the weekend's fixtures. Last week served up a lot of excitments, with the outlook of the table being slightly tweaked as a result of a few upsets. Manchester United picked up their first defeat of the season at home to Aston Villa in a game which saw Kourtney Hause score the winning goal in the 88th minute and Bruno Fernandes grab the headline for missing a 93rd minute penalty.

Title-rivals Chelsea suffered the same feat but at the hands of a more capable Manchester City outfit while Liverpool added to their bid of being the only unbeaten side in the league this season with an enthralling 3-3 draw with newly-promoted Brentford. Meanwhile, Bournemouth failed to capitalize on the slump of the league's heavyweights to occupy the top spot after their 1-1 draw with Crystal Palace.

Manchester United vs Everton: Manchester United will hope to return to winning ways when they take on Everton in Saturday's early kick-off game. The Red Devils were dealt a blow last week after falling to a disappointing 1-0 defeat at home to Aston Villa. Meanwhile the Toffees will also be chasing a second sucessive win the league after last weekend's home win over Norwich.

Chelsea vs Southampton: Thomas Tuchel will be eager to guide the Blues to winning ways when they welcome Southampton to Stamford Bridge on Saturday. The Blues had their unbeaten streak ruined by Manchester City last weekend and Juventus in the mid-week and will be looking forward to ease the mounting pressure. For Southampton, the mission will be to turn their fortunes around and fight for to secure their first three points of the season.

Brighton vs Arsenal: Brighton and Arsenal will face-off at the Amex Stadium on Saturday as both clubs target the three maximum points. Graham Porter's men have impressed so far, winning four, drawing one and losing one of the six games they have featured in so far. Relatively, Arsenal will be eager to keep their impressive form going, having recorded four wins in their last four outings.

Tottenham vs Aston Villa: Tottenham Hotspur will look to bounce back from their defeat to Arsenal when they host Villa. Their opponent from Birmingham come into the encounter fresh off a remarkable 1-0 win over Manchester United.

Liverpool vs Manchester City: Two title favorites Liverpool and Manchester City will lockhorns at Anfield in a mouthwatering fixture ahead of the international break. The former was held to a 3-3 draw with Brentford while the latter picked up a 1-0 win over Chelsea last weekend. The host and their opponent occupy furst and second on the league table respectively.

Who is out of contention for MD7 in the Premier League?