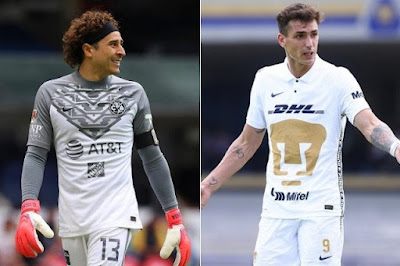 The heated rivalry between América and Pumas UNAM will re-ignite on Sunday evening when these teams collide at Estadio Azteca.

If you looked at the stats and tried to predict the game with only those numbers under consideration, this would be a walk in the park for América. Nevertheless, history has shown us that Pumas are known for rising to the occasion, which means we could have quite a match in our hands.

América get to this game as the top team in the competition after eleven games. Los Azulcremas have only lost once during the season, but they seem to have lost their mojo in their recent games since they have only been able to collect two out of nine points. Their last two games ended in draws against Chivas (0-0) and Pachuca (1-1), something that has made their fans question their title hopes due to the seemingly lack of options for Santiago Solari and Co.

On the other side of the pitch, Pumas make it to Estadio Azteca in seventeenth place, far from the four spots that hand quarterfinal spots and six points away from the one-match playoff clashes. While this may not be seen as an unsurmountable gap, the team's performance throughout the season does not seem to fans much hope, but a win here against their bitter rivals could turn things around before the final stretch of the season.

América's defensive strength is unquestionable. With seven goals conceded, Solari's men are the second-best defensive unit in Liga MX, and if it weren't for that 3-1 loss to Toluca a couple of weeks ago, they'd still have the best defensive record in the league. It is in the goalscoring department where the Argentine boss should make a bit of an effort, since Las Águilas have only found the back of the net 14 times in the competition and some of the biggest problems during the tournament, such as in their outing against Pachuca, were caused by their erratic behavior in front of goal.

As for Pumas, Andrés Lillini's men are still looking for their second win of the season. They have drawn half of their games this season, and their offensive record shows only six goals, the second lowest amount in the league. Their defense has lacked consistency all season long, and even if América's strikers have not been as impressive, this could be decisive when the match gets to its key moments.

While this may seem as a pretty tight game, all of its ingredients hint at one of those matches that could really hit it off once the ref kicks it off. Here are the main points to take under consideration to watch América lock horns against Pumas.

América vs Pumas UNAM - Who's in and who's out?