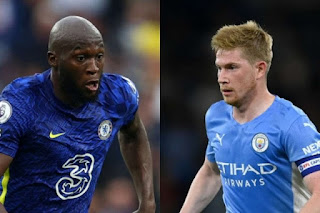 It's set to be a rematch of the 2021 UCL final as English heavyweights Chelsea and Manchester City square off at Stamford Bridge on Saturday afternoon. The Blues come into this match presently on top of the Premier League table, and their form has many buzzing that this season could be one in which they look set to make a serious push for the league crown. Chelsea come into this game having survived a nervy Carabao Cup tie against Aston Villa, during which they eventually came out on top following a 4-3 victory in a penalty shoot-out. Although they've won their last four across all comps, Thomas Tuchel's men will naturally be wary of the visit of Manchester City, who beat them 3-1 in this same fixture last season.

Meanwhile, reigning champs Manchester City have picked up ten points from their opening five games, which sees them sitting in fifth place. They have recovered well following an opening day loss to Tottenham to find their footing, but failed to find a way past Southampton last weekend and had to settle for a very disappointing draw. Like Chelsea, City did enjoy success in their midweek Carabao Cup tie, and unlike the Blues, were able to settle things in regular time thanks to a comprehensive 6-1 win over lower-tier side Wycombe.

Both teams will be European action shortly, but arguably it looks like Manchester City will have the tougher challenge as they'll be facing PSG. Chelsea, on the other hand, will be taking on Juventus, but given the Italian side's less than impressive domestic form, the Blues may really be fancying their chances at taking one step closer towards the round of 16.

Interestingly, none of the prior 12 meetings between these two sides have ended as draws. Will that change in Saturday's match, which is predicted by many to be a cagey affair?

Chelsea: Edouard Mendy has now recovered from a hip problem and will resume his spot in the starting XI. However, American star Christian Pulisic is still out with an ankle injury, while English youngster Mason Mount picked up a slight injury during Chelsea's 4-3 win over Aston Villa in the Carabao Cup so looks set to miss out here.

Manchester City: The visitors have been given a huge boost with John Stones, Aymeric Laporte and Rodri expected to return to the fold after their respective injury lay-offs, but Ilkay Gundogan isn't expected to feature here. Meanwhile, youngster Nathan Ake, who missed City's midweek Carabao Cup tie against minnows Wycombe to go to his father's funeral, should return for this match.

Where to watch Chelsea vs Manchester City live on September 25, 2021

Live elsewhere? Here's where you can watch Chelsea vs Manchester City live from your current location: