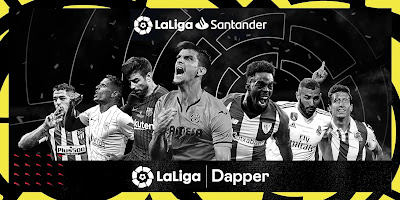 La Liga returns this weekend and most of the clubs will be keen on grabbing favorable results as the table shapes up. Real Madrid will particularly look to carry on plundering the goals and add to their impressive run in the early stages of the LaLiga title race when they welcome Villarreal to Santiago Bernabeu on Saturday. Relatively, archnemesis Barcelona are aiming to put their poor start to life in the league behind when they take on Levante on Sunday.

Defending champions Atletico Madrid will be hosted by Deportivo Alaves and will set ther sights on securing victory in order to usurp their cross-town rivals who occupy the top spot. Meanwhile, Valencia will welcome Athletic Club to the Mestalla as they look to bounce back from the 3-1 defeat to Sevilla in their last outing. Their Basque opponents are also have a point to prove and will be out to get a win after their suprise defeat to Rayo Vallecano.

League standings ahead of Matchday 7 - Top 5

Deportivo Alaves vs Atletico Madrid: Atletico Madrid will hope to keep their title defence going when they visit struggling Deportivo Alaves on Saturday. While Los Rojiblancos are yet to suffer defeat in their outings so far, the opponent they face is under intense pressure as they currently languish at the bottom of the table after losing all five of their games so far.

Valencia vs Athletic Club: Valencia and Athletic Bilbao will square off in La Liga action on Saturday, as both sides look to bounce back from defeats last time out. The hosts were handed a 3-1 loss by Sevilla on Wednesday, while the Basque outfit fell short against newly-promoted Rayo Vallecano.

Sevilla vs Espanyol: On Saturday, Sevilla will try to build on their brilliant start to the La Liga season when they play newly promoted Espanyol at the Ramon Sanchez Pizjuan Stadium. Jule Lopetegui's side extended their unbeaten streak to three games with a 3-1 victory over Valencia last time out, while the visitors won their first game of the season on Wednesday.

Real Madrid vs Villarreal: After a dominating win against Mallorca, Real Madrid will play Villarreal on Saturday. Los Blancos will be looking to make it six straight wins in all competitions when they continue their La Liga campaign at home and host the Yellow Submarines. The latter will go into the game high in confidence after hitting Elche for four in their last outing.

Barcelona vs Levante: Barcelona will attempt to get back to winning ways in La Liga when they face Levante at home on Sunday afternoon. The Catalan giants are currently seventh in the rankings, and are already seven points behind leaders Real Madrid On the other hand,. Levante are 16th, having accumulated only four points from their opening games.

Real Betis vs Getafe: Getafe's quest for their first points of the 2021-22 La Liga season continues on Sunday evening as they travel to Seville to face Real Betis. Michel's team has lost all six of their league games this season, placing them 19th in the table, while Betis are eighth, having picked up nine points from their first six games this season.

Who is out of contention for La Liga MD 7?