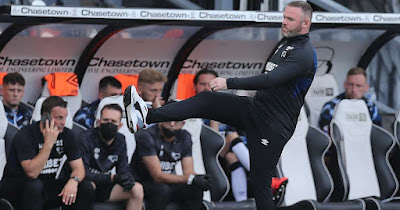 The Rams' financial woes came to a head when they filed for administration this week, with a 12-point deduction sending them to the foot of the second tier.

Rooney took permanent charge in January but the former England captain revealed the difficult circumstances he has been working under amid an apparent lack of communication from Morris.

Derby's football staff were at a meeting with Morris on Tuesday but Manchester United legend Rooney was disappointed not to have one-on-one talks with the chairman as uncertainty mounted.

"In my opinion, it wasn't sincere enough, it wasn't heartfelt enough, and it wasn't done with enough honesty," said Rooney ahead of Saturday's trip to Sheffield United.

"Obviously he has moved on and we have to move on and put Mel Morris to the back of our minds.

"I personally haven't spoken to Mel Morris since August 9. I still haven't had a one-on-one conversation, no phone call, no text message. Nothing.

"I find it a bit disrespectful, to be honest. Communication is so important, whether it’s good news or bad news, so we can deal with it.

"He doesn't have to apologise to me. I just found, as manager of this football club, getting questions from players and staff and not being able to answer, I was hurt by that.

"He's put a lot of money into the club, and he deserves a lot of respect for that, but there are ways of handling things and it has left me disappointed."

Derby face the possibility of a further points deduction due to a potential breach of the EFL's Financial Fair Play rules.

Andrew Hosking, Carl Jackson and Andrew Andronikou of business advisory firm Quantuma have been appointed as the club's administrators.

Rooney, however, insists he will stay put as long as Derby want him.

"I have said how committed I am to this job and this club. Nothing changes," he added.

"I am committed to this football club. I grew up on a council estate in Liverpool. I know how tough life can be.

"What kind of person would I be if I went and laid on a beach for a few weeks? We can stay up but if we get more points deducted, it will get a lot more difficult."