Chances were few and far between in the first leg of the all-Brazilian Copa Libertadores semi-final with only one shot on target. 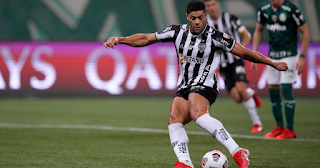 Brazil international Hulk missed a first-half penalty as Atletico Mineiro grabbed a 0-0 draw away to reigning champions Palmeiras in the first leg of their Copa Libertadores semi final on Tuesday.

Hulk, who has netted seven goals in this season's edition, sent Palmeiras goalkeeper Weverton the wrong way with his low 42nd-minute spotkick but his effort cannoned into the post.

In a game where neither goalkeeper was legitimately tested, Atletico had the better of the chances at Sao Paulo's Allianz Parque, with 11 shots to Palmeiras' four but could not make them count.

Luan dragged an early left-foot shot wide for the visitors, while Palmeiras' best first-half opportunity came from Rony with an off-target effort.

Paraguayan defender Gustavo Gomez scythed down Diego Costa inside the box, offering Atletico an opportunity from the spot, but Hulk fluffed the chance.

Hulk sought redemption in the second half, lashing a powerful long-distance strike over Weverton's crossbar.

The second leg will take next Tuesday in Belo Horizonte, with the winner to take either Flamengo or Ecuadorian club Barcelona in the final on November 27 in Montevideo.