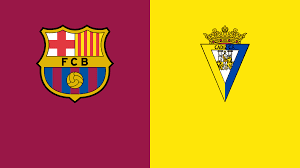 Barcelona are looking to return to winning ways in the last fixture of the mid-week’s La Liga schedule on Thursday evening when they take on Cadiz away at Estadio Nuevo Mirandilla.

Barcelona are going through very tough times at the beginning of the new La Liga season.

They are yet to lose in the league, but their displays are miles away from what we have been used to watch from Blaugrana.

Ronald Koeman does have numerous problems with injured players and he has just lost the likes of Lionel Messi and Antoine Griezmann this summer.

However, the Dutch manager seems to have lost even the tiniest clue on what to do at Barcelona’s helm.

His latest attempt was to bring in Gerard Pique and use him as a striker alongside Luuk de Jong on Monday evening against Granada.

The equalizer eventually came just at the 90th minute when center-back Ronald Araujo head the ball into the back of the net.

Barcelona have now won only one of the last four games in all competitions. They fell 0-3 to Bayern Munich and played 1-1 to Granada in the last two home matches.

We thus don’t have too many reasons to consider the Catalans favorites here against Cadiz who will come into this tie in much higher spirits.

Alvaro’s troops bagged their first win of the season on Friday evening when they dispatched Celta Vigo 1-2 on the road.

Cadiz took four points from two H2H games against Barcelona in the previous term of La Liga.
They picked up a 2-1 victory at home and held Blaugrana to a 1-1 draw in the reverse fixture at the Camp Nou.
Before these games, Barcelona picked up two wins over Cadiz in the 2005/06 La Liga season (back when the two teams last played each other before the previous season).

We also see a huge value in backing Cadiz to stun the struggling Catalans at the sky-high 6.00 odds.