Barcelona president Laporta warns Koeman: If decisions have to be taken, we'll take them 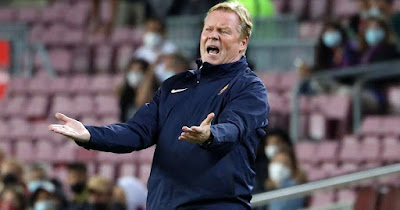 Ronald Koeman's job as Barcelona head coach does not depend on the outcome of Thursday's meeting with Cadiz, but president Joan Laporta has warned that "if decisions have to be taken, we will take them".

The Dutchman is under growing pressure following a slow start to the campaign that has seen Barca drop points to Athletic Bilbao and Granada in their opening four LaLiga games, while also losing 3-0 to Bayern Munich in the Champions League.

Amid reports Barca are lining up replacements for Koeman, with Belgium boss Roberto Martinez supposedly among the candidates, Koeman refused to answer any questions from reporters at Wednesday's news conference previewing the trip to Cadiz.

Koeman instead chose to read a prepared statement in which he urged Barca fans to have patience with the process while claiming the club's hierarchy – including Laporta – was fully behind him.

There have even been suggestions in the Spanish press that Thursday's clash at Estadio Nuevo Mirandilla could be the 58-year-old's last in charge should Barca fail to pick up all three points.

While Laporta insisted that is not the case, the Barca chief fell short of guaranteeing that the former Netherlands boss will remain in charge further down the line if results do not pick up.

"Koeman's future doesn't depend on the result tonight," he told El Chiringuito outside the Barcelona team hotel on Thursday. "We are with the coach. He's Barca's first team coach and what we want is for things to go well.

"All coaches, not just Koeman, depend on results, and in Barca's case on their style of play. Koeman is our coach and we're with him today."

Barcelona have failed to win five of their last eight LaLiga games stretching back into last season, as many as in their previous 24 matches in the competition, and are eighth in the table ahead of their game in hand.

Koeman this week spoke out in the Dutch media about the wider issues at Camp Nou and how Lionel Messi, who departed for Paris Saint-Germain on a free transfer last month, papered over the cracks with his individual brilliance.

But Laporta does not want to use Messi's shock departure, plus the subsequent exit of Antoine Griezmann, as an excuse for Barca's disappointing run of results.

"We see that the team isn't working as we all were hoping," Laporta said. "In that sense, we'll act thinking always of Barcelona... If decisions have to be taken, we'll take them.

"What I don't like is a conformist attitude, a certain defeatism, that can't be allowed at Barcelona. We have the team we have, but we can aspire to win LaLiga and the players say to me that we have to be optimistic.

"We have to work, we have to fight every day, because I believe you achieve success with daily work. Less talking and more doing, more working."

Barcelona have failed to win their last two LaLiga games against Cadiz (D1 L1). If they fail to win Thursday's match, it will be their longest winless run against the Andalusian side in the competition.