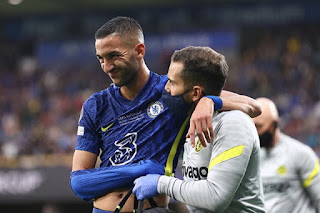 Wednesday was a bittersweet day for Chelsea despite winning the UEFA Super Cup. Although getting your hands on silverware is always a moment to celebrate, let alone a European trophy, the midweek triumph over Villarreal came at a cost: the injury to Hakim Ziyech.

The Moroccan ace moved to Stamford Bridge last season but endured a disappointing and injury-interrupted campaign. The former Ajax man, however, impressed during the pre-season and was looking forward to a promising 2021/22 term, which is set to start this weekend with the Blues' English Premier League clash with Crystal Palace.

Unfortunately, the 28-year-old suffered another knock and it was during Chelsea's curtain-opener UEFA Super Cup tie. Right before half time, the attacker could be seen in visible pain after taking a blow to the shoulder shortly after getting tangled with Juan Foyth.

Ziyech was treated with an oxygen device to help with the pain before being taken off the pitch. This comes as a huge blow to not only the player, but also the club, as it was the North African talent who broke the deadlock for the London giants with a lovely 27th-minute goal.

"If you take a player out during the first-half it is serious," Tuchel told BT Sport after the final whistle.

"[It's] unfortunate, because he has been a decisive player in recent games."

Hakim could be seen celebrating the penalty shootout victory but is now destined to miss Chelsea's Premier League opener vs Crystal Palace on Saturday. The length of his absence remains unclear but he could miss his team's tough start to the 2021/22 campaign as Tuchel's men are set to face Arsenal, Liverpool, Tottenham, and Man City in their opening six games.