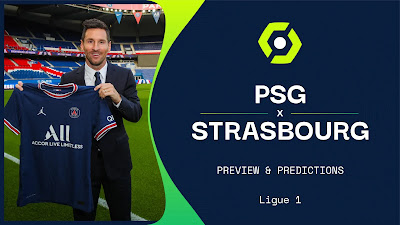 In their first home game of the Ligue 1 2021-22 campaign, PSG invite Strasbourg to Le Parc des Princes on Saturday. Giants Paris Saint-Germain kicked off their campaign with a 2-1 win at Troyes. They came back from behind as Achraf Hakimi and Mauro Icardi scored twice in two minutes after Troyes took an early lead. Strasbourg suffered a 2-0 defeat in their season opener at home to Angers andwill be looking to open their account for the campaign when they travel to the capital.

The two clubs have faced off 53 times across all competitions. As expected, Paris Saint-Germain have the upper hand in the fixture and have 31 wins to their name. They have been undefeated in their last eight encounters with Strasbourg and are on a three-game winning streak. The visitors have eight wins to their name but are still winless at Le Parc des Princes. The spoils have been shared 14 times between the two sides. They last squared off at the Stade de la Meinau in April, with that game ending in a 4-1 win for Les Parisiens.

PSG Alexandre Letellier, Colin Dagba, Sergio Ramos and Juan Bernat are the injury concerns for Mauricio Pochettino ahead of this home game. Idrissa Gueye is still under protocol after testing positive for COVID-19 last week and remains unavailable for this encounter. Lionel Messi trained for the first time at Paris Saint-Germain on Thursday but a much-awaited debut is not on the cards yet.

The attacking duo of Lebo Mothiba and Moïse Sahi are the two injury concerns for Les Coureurs. Mothiba has been ruled out with a knee injury while Sahi picked up a thigh strain. Both players are expected to be back in a month.