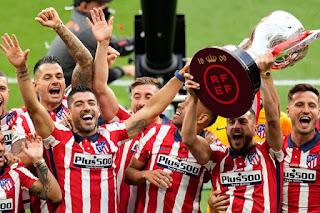 La Liga is finally back! After a three-month break, the Spanish Primera Division is set to make its much-awaited return on Friday, with the 2021/22 season kicking off with the 3 p.m. ET showdown between Valencia and Getafe.

All eyes will—once again—be on Spain's top three dogs: Real Madrid, Barcelona, and Atletico Madrid. Diego Simeone's side won the title last term, beating Los Blancos and the Blaugrana to the league crown, being crowned the champions on the final Matchday courtesy of a two-point advantage. Will Luis Suarez and the recently-signed Raul de Paul lead Los Rojiblancos to another Spanish top-flight crown?

Not if Real Madrid have something to say about it. While the Santiago Bernabeu side have not made much changes to the squad that came up short both domestically and in Europe last season, Los Merengues will have a new manager in the form of Carlo Ancelotti. The iconic Italian tactician was named the successor to Zinedine Zidane and it will be interesting to see how he fares in his second spell at the Bernabeu without the likes of Sergio Ramos and Raphael Varane.

Then there is Barcelona, a club whose past few months could make for an interesting book. Despite signing the likes of Sergio Aguero, Memphis Depay, and Eric Garcia for free, the Catalan giants remain in dire financial situation and are struggling to register any of their summer additions. Then there is the issue of Lionel Messi's departure, with the Argentine icon calling an emotional end to his 21-year stay in Barcelona despite having agreed to a significant pay cut in order to stay at the Camp Nou.

Sevilla, Real Sociedad, Real Betis, Villarreal, and Valencia will also be eyeing an impressive 2021/22 campaign but will have to wrestle with three continental giants in order to come away with any sort of silverware this term. Here's everything you need to know about Matchday 1 of the upcoming La Liga season.

Of Spain's top three teams, Real Madrid will be in action first, taking on Deportivo Alaves at 4 p.m. ET live. All eyes will be on Ancelotti and whether Carletto can kick things off with a win. Los Blancos will be the away side but their opponent only just survived relegation last season, which should give Benzema and Co. confidence. Barcelona and Atletico Madrid will take to the field on Sunday, with Los Rojiblancos visiting Celta Vigo at 11:30 a.m. ET and the Blaugrana hosting Real Sociedad at 2 p.m. ET. The Camp Nou showdown is the standout fixture as the Catalan giants look to embark on their post-Messi era with a win.

Which players are OUT for Matchday 1?