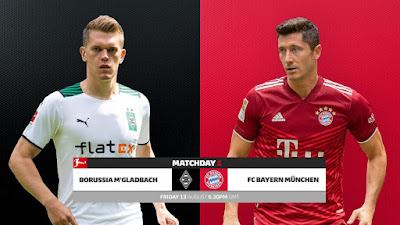 Borussia Monchengladbach and Bayern Munich go head to head in the curtain-raiser of the 2021/22 Bundesliga campaign this Friday. It promises to be a riveting contest between two clubs hoping to kickstart a new era under the leadership of new coaches.

On the one hand, Julian Nagelsmann is desperate for a positive start after a faulty pre-season that saw his team fail to secure a single victory. Managing a club of this magnitude was always going to be a challenge for the 34-year-old, especially in the wake of a pandemic that has prevented him from signing too many players in the market.  However, the former Hoffenheim tactician will be aware of the fact that a positive start to the campaign should relieve all the pressure, giving his side the confidence to get back on track.

Things are equally challenging for Gladbach, who are yet to make any notable moves in the market aside from bringing in Luca Netz. New coach Adi Hutter, therefore, will have to make use of the resources currently available to him. The Austrian tactician does have a solid record against Bayern from his time at Eintracht Frankfurt. But his new team may require some time to settle in, thus making the Bavarians the favourites heading into this affair.