There are reports that Ansu Fati may need surgery again 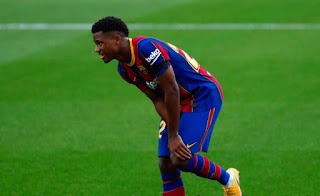 Barcelona fans are worried On Ansu Fati's Slow Recovery. According to reports, the angle injury is not healing and she will have to undergo surgery on her knee. Ansu will miss this season completely if he undergoes further surgery.
Ansu has already undergone two surgeries to repair his knee injury. The news of this injury is being reported by close circles with Barcelona. But at the same time, some say the news is false. The club has not yet commented officially on the matter.
Ansu Fatih was injured early in the season against Real Betis. The teenage star was about to get off to a great start this season. Ansu scored five goals and two assists in his first month.