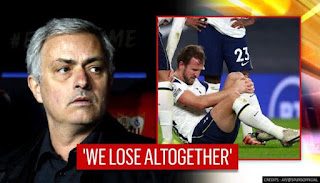 After suffering a 1-0 shock defeat against Brighton on Monday, Tottenham Hotspur manager Jose Mourinho said that the side did not lose because of any individual player.

At the same time, when asked about striker Gareth Bale's performance, Mourinho refused to answer the question, stating he does not reckon that it is fair to answer. Bale has managed to score just four goals in 15 appearances across all competitions but Mourinho has backed the Englishman and instead, has gone on to say that they ended up losing the contest as a team.

"So I do not think it is fair, especially for myself, in the representation of my team, I do not think it is fair to answer to you to that question, especially now. If that question comes in a great moment for the team, and after a victory, and when Gareth like the team plays a good game, it is easier for me to answer to you. I do not want to do that. We lost, and we all lost," he added.

The upset loss has now taken the Spurs down to the sixth position with nine wins from 20 matches and 33 points in their tally. They will next be seen in action against the seventh-placed Chelsea at Tottenham Hotspur Stadium on Friday.

A loss there would bring Tottenham down to the seventh spot in the EPL points table while the winner of that match will break into the top-five.