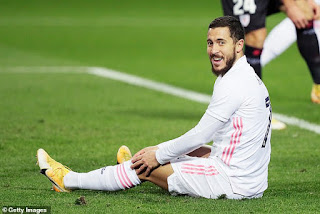 Real Madrid coach Zinedine Zidane admitted Eden Hazard was low on confidence after the Belgian delivered another poor performance in his side's 2-1 defeat by Athletic Bilbao on Thursday to exit the Spanish Super Cup.

The Belgian, Real's record signing, has only scored two goals in all competitions this season and offered little in attack after failing to create much danger in last Saturday's 0-0 draw at Osasuna.

'He needs to recover confidence, play a great game or score a goal, just to do something different. We know what a great player he is and we need to be patient with him as he is working hard,' Zidane told reporters.

'We are behind him and we must give him time. The fans want to see the best version of Eden so we must be patient. We're sticking with him and he really wants to step up. But today it wasn't just Eden, we're all in this together.'

Real won last year's Super Cup but they were caught out by an intense Athletic side improving quickly under the guidance of coach Marcelino, who was taking charge of his second match since succeeding Gaizka Garitano.

Raul Garcia put the Basques in front early after an error by Lucas Vazquez before converting a penalty to double the lead.

'Today we struggled in the first half, we improved in the second but it wasn't enough,' added Zidane.

'We were not able to read the game well. They pressed us very well and we lost the ball a lot, which was unusual for us.

'We know there'll be a lot of external noise after this but we'll just focus on keep working hard.'