The VAR incident wasn't shown on broadcast: Should Real Madrid have a penalty? 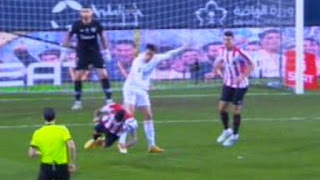 Unai Nunez, on his way to ground after a struggle with Marco Asensio, appeared to handle the ball, but play continued until Sergio Ramos went to ground himself in search of a penalty.

VAR started a review and the focus appeared to be on the incident involving Ramos. However, it was the handball incident that was being checked, even though that wasn't shown on the live broadcast of the game.

Asensio himself commented on the incident after the game.

"It hit him on the hand," the winger said.

But, after more than a minute, the decision was made that there was no handball and the game continued.