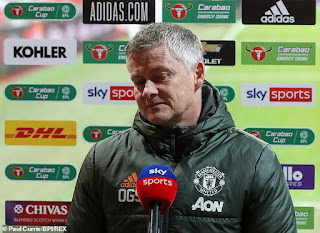 Manchester United boss Ole Gunnar Solskjaer was gracious in defeat after missing out on the Carabao Cup final to Manchester City, while making a subtle dig at Liverpool by branding Pep Guardiola's side 'the best team in England.'

Solskjaer watched on at Old Trafford as his resurgent side failed to outclass City with goals from John Stones and Fernandinho bringing the cup run to an end.

The United boss feels his side have improved greatly from last year, but admitted the level of performance wasn't high enough to come out on top against neighbours City, particularly when it came down to set pieces.

Speaking to Sky Sports at the final whistle Solskjaer said: 'Manchester City can score many great goals. You can accept that.

'When you concede two simple set-plays, it's very disappointing. Just not good enough in those moments.

'We didn't create enough big chances. They didn't either. We didn't have the extra finesse we've had in the games lately. We weren't good enough today.

'We played against a very good Manchester City team. They played well. When they play well you have to play very well to beat them. We were just lacking that little bit.

'We're getting closer. This is a much better version of United than a year ago in those semis.

We didn't create enough big chances and we didn't have the extra finesse in the games lately and we weren't good enough today and when you concede two set plays its disappointing.

We want to go to a inal and that would give us an extra boost. Then you got to dust this off and then we got FA Cup and big league games. Then suddenly Europa League is here again.