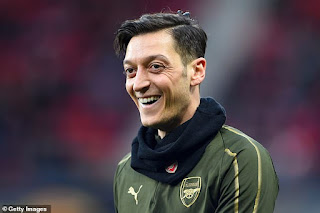 Mesut Ozil is happy to leave Arsenal this month but only if the club continue to pay the remainder of his salary over the next two years, according to reports.

The Arsenal midfielder has not featured for the club under current manager Mikel Arteta since March and is expected to depart the Emirates Stadium this years as his £350,000-a-week contract comes to an end in June.

Reports have recently linked the 32-year-old with a move to Turkish club Fenerbache and Major League Soccer side DC United.

And according to The Sun, Ozil is willing to cut his big-money contract at Arsenal early, but only if the club pay him £68,000-a-week until the summer of 2023.

Meanwhile, reports in Turkey say both the club and Ozil have entered talks over his remaining wages, which could pave the way for him to move on this January transfer window.

Should Ozil stay at the club until his contract expires, he would earn roughly £7.2m, and it is understood that the outcast will not leave for a penny less than what he is owed from Arsenal.

The Gunners are aware of Ozil's stance but would rather not take the hit and are looking to reach a compromise.

Arsenal boss Arteta said this week that he hopes a solution to the stand off is found shortly.

'I'm saying we will decide what's happening in the next few days,' Arteta said. 'I don't know what is going to happen. Obviously now he's free to negotiate with other clubs.

Ozil joined Arsenal from Real Madrid in September 2013 for a then-club record £42.5million.

The 32-year-old has led the Gunners to four FA Cup triumphs, but barely featured in their most recent victory in the competition as Arteta had culled him from the squad by then.

Ozil has played 254 times for the north London club, scoring 44 times and registering 77 assists in all competitions.