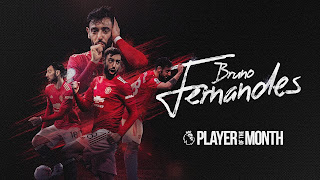 This is the 4th POTM award he has won since joining Man Utd. There are only 5 players in PL history with more Player of the Month awards than him - Aguero, Gerrard, Kane, Van Persie, and Rooney.

The 26-year-old scored twice in Manchester United's 6-2 drubbing of Leeds and also found the net in the 2-2 Boxing Day draw with Leicester.

The Portugal midfielder has scored 15 goals in 26 games this season across all competitions, helping Manchester United move three points clear of Liverpool at the top of the Premier League table.