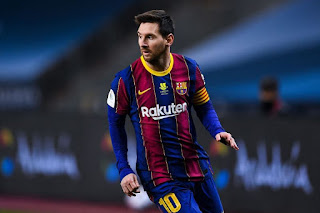 Lionel Messi is regarded as one of the best footballers to have played the game, and his contract with Barcelona highlights his importance to the club.

According to El Mundo, Lionel Messi's contract with Barcelona ensures €138 million per season, not including the variables.

Messi signed a new contract with Barcelona in 2017, which runs till the summer of 2021. During this period, the Argentina international could pocket up to €555,237,619.

This news comes at a time when Barcelona are struggling financially, with the club now in a precarious condition.

Lionel Messi set to leave Barcelona in the summer?

Lionel Messi's current Barcelona contract expires in the summer, with the forward now free to talk to European clubs regarding a move.

There have been no signs from Messi or his camp about wanting to sign a new deal with Barcelona. Even if there was interest, rumours suggest that the 33-year old would have to take a wage cut to extend his stay with the Catalan club.

Messi made his debut for Barcelona in 2004, and has made 754 appearances in all competitions, scoring 649 goals. He is regarded by many as the greatest player to have played for Barcelona.

However, Lionel Messi announced his decision to leave Barcelona last summer, with Manchester City heavily linked as a potential destination. A move failed to materialise.

Barcelona have been an inconsistent unit under the management of Ronald Koeman this season. They are 4th in La Liga, ten points behind league leaders Atletico Madrid.

After a slow start to the season, Lionel Messi has come to the fore once again, making 17 La Liga appearances, scoring 11 goals and providing two assists.

His contract situation with Barcelona has dominated headlines in recent months, and various top European clubs are said to be keeping a close eye.

Manchester City and Paris Saint-Germain have been mooted as potential destinations for Lionel Messi, with both clubs boasting of personnel who enjoy a good relationship with Barcelona's captain.