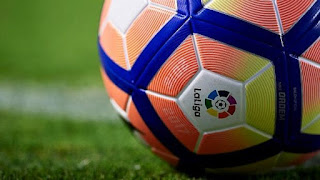 MADRID: Forward Rafa Mir scored a hat trick to lead last-placed Huesca to a much-needed 3-1 victory at Valladolid in their La Liga match.

Mir, who is at Huesca on loan from Wolverhampton, ended a four-game scoreless slump for the modest team from northeast Spain when he headed in a cross from Pablo Maffeo in the 37th minute on Friday.

He doubled his tally in the 50th when he used nice control to pull in a lobbed ball from Maffeo. He held off two defenders before poking the ball past goalkeeper Jordi Masip before creating his third goal in the 57th when he headed on a long ball to Dani Escriche, charged forward, and fired the return pass from Escirche just inside the post.

Huesca remained bottom of the table after just its second win of the La Liga season.

Valladolid was left in 16th place, two points above the relegation zone. Agencies