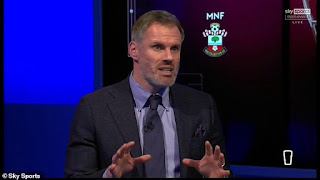 Jamie Carragher is alarmed about Liverpool's recent form after their defeat at Southampton and claims they will not win the league if they don't sign a centre-back in January.

Jurgen Klopp's Reds went down 1-0 to Southampton to Manchester United the chance to go three points clear at the top of the Premier League if Ole Gunnar Solskjaer's side beat Burnley in their game in hand next week.

Liverpool drafted in captain Jordan Henderson as a makeshift centre-half in Monday night's defeat at St Mary's but Carragher says Klopp's side will not be champions if they do not recruit in this month's transfer window.

Carragher told Sky Sports after the Southampton match: 'I can't see Liverpool winning the league if they don't buy a centre-back.

'I said that after the Everton game when (Virgil) van Dijk was injured but I think it's a really tough ask if they don't bring anyone in.

'The fact they played Jordan Henderson at centre-back is not going to do a lot for the two lads on the bench (Rhys Williams and Nathaniel Phillips) and their confidence if they have two midfielders playing there. Henderson is not a centre-back. He did well, but it's not his position.'

The Merseysiders failed to bring in a defensive recruit following the summer departure of Dejan Lovren, with raw defenders Williams and Phillips taking it in turns to partner midfielder Fabinho at the back.

Carragher, meanwhile, claims Liverpool's problems are greater than a shortage in defence, with the Reds' front line failing to strike a decisive blow for the second Premier League match in a row.

Liverpool failed to muster a shot on target at St Mary's until the 75th minute, while they also fired a blank in their last game away at Newcastle.

Before this barren run, Klopp's Reds were also held to a 1-1 draw to Sam Allardyce's West Brom, who shipped four at home to Arsenal on Saturday night despite the Gunners suffering from their own attacking woes this season.

Carragher added: 'I expected a reaction from Liverpool (tonight) on the back of two poor performances. I think we had another one. We looked at Liverpool's away form this season, it's so poor isn't it?

'They never looked like scoring (against Southampton. Did the goalkeeper make a good save or a big save? Did anyone have a chance to score?

'That's a real worry for Liverpool at this moment in time, it's nowhere near good enough.

Former Reds defender Carragher also slammed Klopp's side for a lack of urgency in the Southampton defeat, especially in the final seconds of the game when Liverpool opted to take a short corner deep into stoppage time.

The Sky pundit said: 'Liverpool scored a lot of late goals over the last couple of years, they've forgotten how to play like that.

'What summed it up was Liverpool's (last) corner. They did the same against West Brom. It has got to go in the box. You have to score in ten seconds, it has to go in.

'Liverpool's team is amazing but it's going through the first real rough patch for two or three seasons. Where are the goals coming from?'