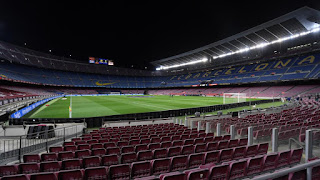 Two members of staff at Barcelona have tested positive for Covid-19, causing training to be cancelled ahead of their league clash with Athletic Club.

Barcelona called off their scheduled Tuesday training session as a precaution after two members of first team staff tested positive for coronavirus.

Ronald Koeman’s side were due to be preparing for their LaLiga match against Athletic Club at San Mamés on Wednesday. The Catalan club informed sports and health authorities after Monday's test results.

A club statement read: "The whole squad will undergo further PCR testing on Tuesday morning local time in line with La Liga protocol. As a result the training session planned for tomorrow Tuesday at 11.00am CET has been postponed. The new time for training and the subsequent press conference ahead of Athletic Club v FC Barcelona will be announced tomorrow [Tuesday]."

Koeman’s team are fifth in the table ahead of their trip to Bilbao to meet Athletic, who are eighth. Barca, who are 10 points off the top of LaLiga, have won their previous two on their travels after going four away league games without a win.