Athletic Club vs Barcelona: No time for parties 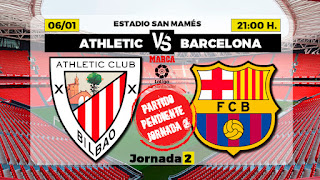 Neither Athletic Club nor Barcelona are in the mood to throw a party as they meet on Wednesday evening in LaLiga Santander.

The Basques, having changed coach, will be hoping to kick start a new stage, while the Catalans will be desperate to show a better image of themselves after their recent performances. Barcelona have had extra complications though, as two members of the club's coaching staff tested positive for the coronavirus on Monday.

After another round of testing, no new positives in the squad were detected, but Barcelona have enough uncertainty surrounding them on the pitch at the moment. Ronald Koeman's side ended 2020 with a disappointing draw against Eibar at the Camp Nou, and they then struggled in their win at Huesca to open 2021.

On Three Kings' Day, e Catalans will be desperate to improve the mood surrounding the club. They currently sit fourth in the table, 10 points off leaders Atletico Madrid, and another setback would be fatal.

It looks as though Koeman will continue to trust his 4-3-3 formation, though Antoine Griezmann could make a return to the XI