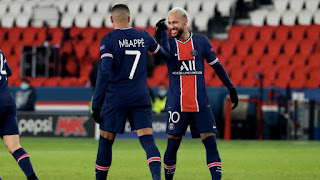 Neymar was on a hat-trick after bagging twice against Basaksehir but handed the ball to Mbappé to break his Champions League drought from the spot.

Thomas Tuchel praised Neymar for his selflessness after the Paris Saint-Germain star handed over penalty duties to Kylian Mbappé against Istanbul Basaksehir.

His first came from the penalty spot three minutes before half-time, Neymar handing over duties having already scored a brace at the Parc des Princes.

That gesture was lauded by PSG coach Tuchel as Mbappé, 21, became the youngest player in Champions League history to reach 20 goals in the competition, breaking Lionel Messi's record.

Tuchel: "It shows that Neymar has a very big heart"

"It’s a big gesture, because he gave him the ball when he could do a hat-trick. It’s not a common thing for Ney to do a hat-trick in Champions League," he told a news conference.

"But he gave it to Kylian to give the possibility for Kylian to end his phase without scoring a goal.

"It shows that Neymar has a very big heart. He always thinks about his team-mates. He knows a lot how important it is for a striker and a guy like Kylian to score. He did good."

Neymar still went on to score his third Champions League hat-trick, with only Messi and Cristiano Ronaldo (eight each) having achieved the feat more often than the Brazil international.

He also became the first player in European Cup/Champions League history to score 20 goals or more for more than one club in the competition after also managing it for Barcelona.

"No, [not surprised by Neymar's level], because I see he is feeling good," Tuchel said.

"It's necessary for him to have pace. It was a difficult phase after the 'final eight' in Portugal, because he gave everything for the team. After that, he got covid, so it was hard for him to get back in good condition and gain some physique capacities. In the last few weeks, he could do that.

"He is feeling good a can find the pace. He is always able to make the difference. He did it against Leipzig, against Manchester [United], and of course today. It was good mix between simple football and decisive dribbling, shoots, and goals. A good, good mix, an outstanding performance."