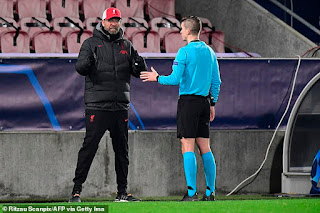 Jurgen Klopp has explosively claimed he is no longer sure whether VAR is a good idea after the technology stole the show in Liverpool's Champions League draw with Midtjylland.

Takumi Minamino appeared to have netted a dramatic late winner in Denmark, only for his finish to be ruled out after the officials spotted an apparent handball from Sadio Mane

The string of incidents left Klopp annoyed at full-time and in his post-match media duties, the Reds boss was not afraid to share his opinions

'It just took too long,' he said. 'I think in the end, I didn't see it back, but the decisions were right but it was so difficult to make, it took three or four minutes and it was cold for the boys.

'It is really hard and I could hear people saying, "Oh my God". It took really long and it was really cold, which doesn't help.

'I used to be one of the people who said VAR is a good idea, I'm really not sure if I would say that again to be honest. But now we have it.

His strike also made him the club's highest scorer in the competition, overtaking all-time great Steven Gerrard

Young goalkeeper Caoimhin Kelleher, who has impressed in Alisson's absence, missed out on back-to-back clean sheets in the Champions League after giving away a penalty.

The intervention from VAR came after the linesman initially flagged the move for an offside.

The penalty was soon awarded, however, when replays on the pitchside monitor revealed Dreyer had timed his run superbly.